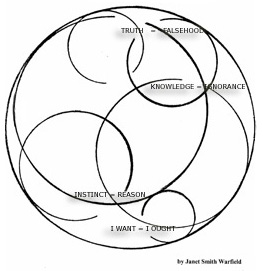 Remember the Genesis story of the Garden of Eden?

What does this story mean in relation to language?

But how do we know these things? Don’t we know them because we’ve been taught by other fallible, creative human beings, by others who’ve arbitrarily split up the substance of experience into this part and that part, this word and that word?

If I were to ask you to describe the color black, without reference to anything else, how would you describe it? As a void? As an absence of light? What do these phrases mean?

But if you were allowed to describe ‘black’ by pointing to a black umbrella, a black flashlight, a black shirt, pretty soon I’d get the idea of what ‘black’ meant. Maybe you’d turn out all the lights in a dark room at night. This is a different idea of ‘black’. Which is the real meaning of ‘black’? Aren’t all these concepts created? Aren’t they all taught?

Remember the story of the Tower of Babel?

The Babylonians decided to build a tower to reach God. When God learned about it, He confounded their speech so they couldn’t understand one another and scattered them throughout the earth.

What if all linguistic opposites were created by the human mind?

God is the Creator. Man is created in the image of his Maker. Is man also a creator – of words – of images – of environments – of hate – of love?

Think of the implications of this.

Every human on this planet has free choice. Is that a soothing or a frightening thought?

If I have free choice, that’s soothing. It’s also overwhelming. I’ve got a lot of responsibility.

If you have free choice, that’s scary. You might not do what I want you to do.

It’s also pretty humbling. I’d better treat you well, because I may need your help and cooperation.